What is Boning Knife?

One can always guess what a boning knife is by just taking a glance at its name. As its name suggests, a boning knife is a long, narrow semi-rigid knife whose main purpose is to cut the bone and to prepare the meat by separating it from the bone.

However, apart from its main purpose, this handy knife can also help you with a number of different kitchen tasks.

Because of lots of different models of boning knives present in the market, there are a number of variances in their features. However, the basic characteristics that make it a boning knife are the same.

What You Can Do with Boning Knife

As I’ve already mentioned boning knife is used for removing the bones from different meats, but it’s a handy tool. You can use it for a lot of different purposes. Some of its uses are:

Boning knife is used to carve and prepare the meat for cooking All over the world,. Preparing the meat with a boning knife is much easier and less time consuming than doing it with any regular knife. You just have to follow some simple steps.

You can skin the soft-covered fruits with either a peeler or a regular paring knife. However, the job becomes difficult when the covers of fruit are hard like those of pineapples and pumpkin.

To get rid of these hardcovers, you can use a boning knife because its blade is a little longer and much sharper and flexible than the other knives.

Baking lovers know how important it is to carve the baked product. A cake without a beautiful shape would mean nothing, but what will you do if you haven’t got a carving knife? Don’t worry, you can easily perform this task with a boning knife.

Yes, you can also use it with the baked products. Thanks to its thin and flexible blades. you can easily sharpen the edges of cakes if they are square, you can make hearts and other design out of its pointed tips.

You can even fill the chocolate filling in the cupcakes by cutting the round portion with its pointed tip.

I just wanted to make clear the difference between the boning knives and the filleting knives. These two knives are often mistaken to be the same due to their close resemblance.  But there is a certain feature that makes them different.

The difference between their structure is that the fillet knife is much thinner than the boning knife. A boning knife can be both rigid and flexible but a fillet knife has to be flexible as it has to deal with the delicate meat like that of fish.

A boning knife is positively an important member of your kitchen. Especially if you eat a lot of meat or if you are a butcher. Not only it helps you prepare the meat, but also becomes your friend while doing other activities.

A point you should always keep in mind while buying a boning knife is that the blade should be sharp and tough enough so that it’s sharpness would be maintained for a long period of time. 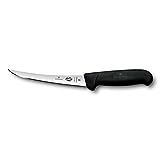 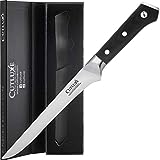